Preparing your business for expansion overseas requires more than just a change in language when translating your business and marketing material. The key to the success of global growth is localisation, and one of the most important steps for many companies’ localisation is tailoring their online presence and website design to their new audiences.

To demonstrate some of the various methods companies have adopted to target their website at a local market, Bubbles has explored the home pages of some of the world’s biggest, and most successful, brands.

There are few brands that have produced as many individual layouts and designs as Nescafé. Providing readers with fully translated and localised websites, the brand has taken time to understand the intricate differences between each market to ensure maximum impact on each target audience.

Targeted towards the US market, the home page above greets visitors with a static logo and short paragraph tailored towards Western ideals, while the background video appeals to the growing interest in video marketing across the country. 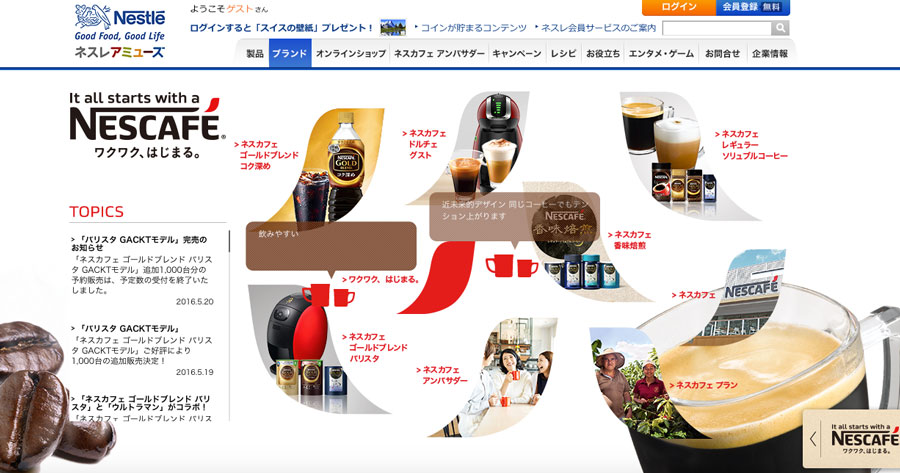 The Japanese Nescafé website looks completely different from its US counterpart. Featuring a more modular design, the website appeals to a market with more interest in descriptions and images than simplicity. The website also features Nescafé’s parent company Nestle’s logo in its header, which Japanese audiences are more familiar with.

The basic design of the McDonald’s website has continuity across the majority of its regional versions, and translation is only applied where required. This approach to localisation suggests McDonald’s has based its marketing strategy around the appeal of a westernised fast food chain to countries all over the world. The differences in the websites often only become clear when exploring the food and ‘Happy Meal’ toy options on offer, which have been adapted to suit regional tastes.

This website has been targeted towards the Australian audience, who have developed a more refined palate in recent years thanks to the explosion of gourmet gastronomy across the country. This is reflected in the reference to ‘grown-up ingredients’ on the website’s homepage.

Conversely, the McDonald’s Pakistan website features food offers relevant to the different products on offer, as well as an emphasis on the exclusive ‘Happy Meal’ toys available, which are popular in the region.

As one of the best-known brands in the world, it’s not surprising that Nike is able to maintain popularity and a high market share without making significant changes to the overall layout of the website. However, there are subtle changes in the Nike website design that capitalise on the benefits of localisation without losing the essence of the brand, which is so deeply ingrained in the sporting culture of almost every country in the world.

The website above is the Nike Brazil page, which features an image of the Euro 2016 winning team, Portugal, as well as some text that has been translated from the same feature on the main US website. Capitalising on the recent sporting event, which was watched by millions from around the world, Nike has included the same feature on almost every other version of its website.

Despite hosting Euro 2016, the Nike France website above is one of the only versions of the website not to feature the Portugal team image. Why? As the runners up of the tournament it’s likely that Nike’s French audience will want to avoid any images celebrating their defeat, and the brand has taken this on board when updating the site.

An international symbol of conservation and animal welfare, the World Wildlife Fund maintains an informative and segmented design across the majority of its websites. However, this clever brand has utilised the increased passion of different regions for their local wildlife to increase interest and boost the success of their on-going campaign.

The website above is the home of WWF’s Indian website, which at first glance looks very similar to its main US and UK pages. However, on closer inspection it’s clear that the site is flooded with links to articles on local issues, such as the plight of the tiger, which are likely to draw more attention from an Indian audience. The Canadian WWF home page demonstrates the same emphasis on a clear and segmented website design but features a number of links to articles on relevant local issues, such as the rising threat to the salmon population and Canadian water data.

No matter where you are in the world, you’re never far from a bottle of Coca Cola. One of the world’s most successful brand’s, Coke takes a similar approach to marketing as McDonald’s and focuses on delivering sips of American culture to consumers all over the world.

The home page above is the Brazilian version of Coca Cola’s website, and features the same overall layout of the main US hub. However, just like marketing masters Nike, this legendary brand has taken the route of altering content when tailoring its website to foreign audiences.

Focused on the Rio Olympics, the first page of the Brazilian Coca Cola website makes use of an exciting local event to draw in viewers, while keeping focus on the Coca Cola ‘Journey’ concept that currently dominates the brand’s marketing.

In a similar fashion, Coca Cola’s UK site encompasses the Coca Cola ‘Journey’ concept while appealing to local consumers through regional events. In this example, the site opens on a feature about singer Rita Ora, who is due to open the new Coca Cola Zero Sugar Taste Lounge.

There’s no definitive answer when it comes to creating the perfect marketing campaign or website in new markets, but all of the websites above have demonstrated that success in international markets comes from a willingness to adapt your brand to the culture you’re targeting.

Whether they appealed to a passion for local wildlife or different aspects of their brand’s values to suit the culture of a new market, each of these companies carefully localised their websites to ensure an inviting experience for every visitor, no matter where they are in the world.

Naseem is the project director at Bubbles Translation Services and has spent over 20 years in the translation service industry.

What Valentine’s Day Celebrations Teach Us About Cultural Differences in Overseas Markets
January 18, 2021

A Complete Guide to Translation Across the Buying Journey
January 18, 2021

The Implications of the Brexit Trade Deal for British Businesses
January 18, 2021

What Does a Biden Presidency Mean for International Relations?
December 15, 2020